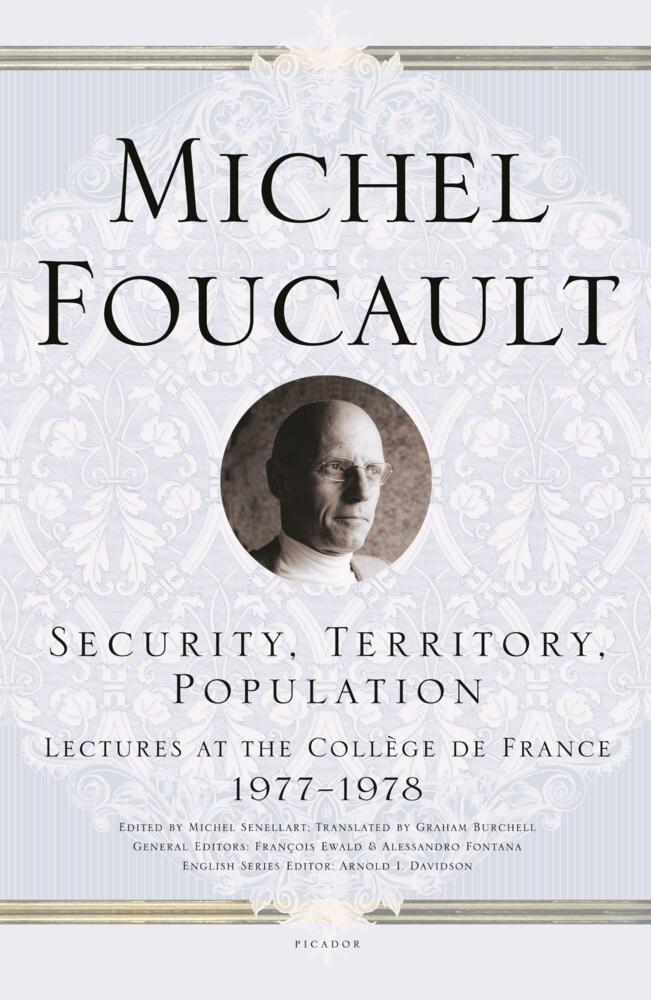 Marking a major development in Michel Foucault's thinking, Security, Territory, Population takes as its starting point the notion of "biopower," studying the foundations of this new technology of power over populations. Distinct from punitive disciplinary systems, the mechanisms of power are here finely entwined with the technologies of security. In this volume, though, Foucault begins to turn his attention to the history of "governmentality," from the first centuries of the Christian era to the emergence of the modern nation state--shifting the center of gravity of the lectures from the question of biopower to that of government. In light of Foucault's later work, these lectures illustrate a radical turning point at which the transition to the problematic of the "government of self and others" would begin.

Marking a major development in Michel Foucault's thinking, Security, Territory, Population takes as its starting point the notion of "biopower," studying the foundations of this new technology of power over populations.

Distinct from punitive disciplinary systems, the mechanisms of power are here finely entwined with the technologies of security. In this volume, though, Foucault begins to turn his attention to the history of "governmentality," from the first centuries of the Christian era to the emergence of the modern nation state--shifting the center of gravity of the lectures from the question of biopower to that of government. In light of Foucault's later work, these lectures illustrate a radical turning point at which the transition to the problematic of the "government of self and others" would begin.

One: 11 January 1978
General perspective of the lectures: the study of bio-power. - Five proposals on
the analysis of mechanisms of power. - Legal system, disciplinary mechanisms,
and security apparatuses ( dipositifs ). Two examples: ( a ) the punishment of
theft; ( b ) the treatment of leprosy, plague, and smallpox. - General features
of security apparatuses ( 1 ): the spaces of security. - The example of the
town. - Three examples of planning urban space in the sixteenth and seventeenth
centuries: ( a ) Alexandre Le Maître's La Métrpolitée ( 1682 ): ( b ) Richelieu;
( c ) Nantes.

Two: 18 January 1978
General features of apparatuses of security ( II ): relationship to the event:
the art of governing and treatment of the uncertain ( l'aléatoire ). - The
problem of scarcity ( la disette ) in the seventeenth and eighteenth centuries.
- From the mercantilists to the physiocrats. - Differences between apparatuses
of security and disciplinary mechanisms in ways of dealing with the event. - The
new governmental rationality and the emergence of "population." - Conclusion on
liberalism: liberty as ideology and technique of government.

Three: 25 January 1978
General features of apparatuses of security ( III ). - Normation ( normation )
and normalization. - The example of the epidemic ( smallpox ) and inoculation
campaigns in the eighteenth century. - The emergence of new notions: case, risk,
danger, and crisis. - The forms of normalization in discipline and in mechanisms
of security. - Deployment of a new political technology: the government of
populations. - The problem of population in the mercantilists and the
physiocrats. - The population as operator ( operateur ) of transformations in
domains of knowledge: from the analysis of wealth to political economy, from
natural history to biology, from general grammar to historical philology.

Five: 8 February 1978
Why study governmentality? - The problem of the state and population. - Reminder
of the general project: triple displacement of the analysis in relation to ( a )
the institution, ( b ) the function, and ( c ) the object. - The stake of this
year's lectures. - Elements for a history of "government." Its semantic field
from the thirteenth to the sixteenth century. - The idea of the government of
men. Its sources : ( A ) The organization of a pastoral power in the
pre-Christian and Christian East. ( B ) Spiritual direction ( direction de
conscience ). - First outline of the pastorate. Its specific features: ( a ) it
is exercised over a multiplicity on the move; ( b ) it is a fundamentally
beneficent power with salvation of the flocks as its objective; ( c ) it is a
power which individualizes. Omnes et singulatim. The paradox of the shepherd (
berger ). -The institutionalization of the pastorate by the Christian Church.

Six: 15 February 1978
Analysis of the pastorate ( continuation ). - The problem of the shepherd-flock
relationship in Greek literature and thought: Homer, the Pythagorean tradition.
Rareness of the shepherd metaphor in classical political literature ( Isocrates,
Demosthenes ). - A major exception: Plato's The Statesman. The use of the
metaphor in other Plato texts ( Critias, Laws, The Republic ). The critique of
the idea of a magistrate-shepherd in The Statesman. The pastoral metaphor
applied to the doctor, farmer, gymnast, and teacher. - The history of the
pastorate in the West, as a model of the government of men, in inseparable from
Christianity. Its transformations and crises up to the eighteenth century. Need
for a history of the pastorate. - Characteristics of the "government of souls":
encompassing power coextensive with the organization of the Church and distinct
from political power. - The problem of the relationships between political power
and pastoral power in the West. Comparison with the Russian tradition.

Seven: 22 February 1978
Analysis of the pastorate ( end ). - Specificity of the Christian pastorate in
comparison with Eastern and Hebraic traditions. - An art of governing men. Its
role in the history of governmentality. - Main features of the Christian
pastorate from the third to the sixth century ( Saint John Chrysostom, Saint
Cyprian, Saint Ambrose, Gregory the Great, Cassian, Saint Benedict ): ( 1 ) the
relationship to salvation. An economy of merits and faults: ( a ) the principle
of analytical responsibility; ( b ) the principle of exhaustive and
instantaneous transfer; ( c ) the principle of sacrificial reversal; ( d ) the
principle of alternate correspondence. ( 2 ) The relationship to the law:
institution of a relationship of complete subordination of the sheep to the
person who directs them. An individual and non-finalized relationship.
Difference between Greek and Christian apatheia. ( 3 ) The relationship to the
truth; the production of hidden truths. Pastoral teaching and spiritual
direction. - Conclusion: an absolutely new form of power that marks the
appearance of specific modes of individualization. Its decisive importance for
the history of the subject.

Eight: 1 March 1978
The notion of "conduct." - The crisis of the pastorate. - Revolts of conduct in
the field of the pastorate. - The shift of forms of resistance to the borders of
political institutions in the modern age: examples of the army, secret
societies, and medicine. - Problem of vocabulary: "Revolts of conduct,"
"insubordination" ( insoumission )," "dissidence," and "counter-conduct."
Pastoral counter-conducts. Historical reminder: ( a ) asceticism; ( b )
communities; ( c ) mysticism; ( d ) Scripture; ( e ) eschatological beliefs. -
Conclusion: what is at stake in the reference to the notion of "pastoral power"
for an analysis of the modes of exercise of power in general.

Nine: 8 March 1978
From the pastoral of souls to the political government of men. - General context
of this transformation: the crisis of the pastorate and the insurrections of
conduct in the sixteenth century. The Protestant Reformation and the Counter
Reformation. Other factors. - Two notable phenomena; the intensification of the
religious pastorate and the increasing question of conduct, on both private and
public levels. - Governmental reason specific to the exercise of sovereignty. -
Comparison with Saint Thomas. - Break-up of the cosmological-theological
continuum. - The question of the art of governing. - Comment on the problem of
intelligibility in history. - Raison d'État ( 1 ): newness and object of
scandal. - Three focal points of the polemical debate around raison d'État:
Machiavelli, "politics" ( la "politique" ), and the "state."

Ten: 15 March 1978
Raison d'État ( II ): its definition and principal characteristics in the
seventeenth century. - The new model of historical temporality entailed by
raison d'État. - Specific features of raison d'État with regard to pastoral
government: ( 1 ) The problem of salvation: the theory of coup d'État ( Naudé ).
Necessity, violence, theatricality. - ( 2 ) The problem of obedience. Bacon: the
question of sedition. Differences between Bacon and Machiavelli. - ( 3 ) The
problem of truth: from the wisdom of the prince to knowledge of the state. Birth
of statistics. The problem of the secret. - The reflexive prism in which the
problem of the state appeared. - Presence-absence of "population" in this new
problematic.

Eleven: 22 March 1978
Raison d'État ( III ). - The state as principle of intelligibility and as
objective. - The functioning of this governmental reason: ( A ) In theoretical
texts. The theory of the preservation of the state. ( B ) In political practice.
Competition between states. - The Treaty of Westphalia and the end of the Roman
Empire. - Force, a new element of political reason. - Politics and the dynamic
of forces. - The first technological ensemble typical of this new art of
government: the diplomatic-military system. - Its objective: the search for a
European balance. What is Europe? The idea of "balance." - Its instruments: ( 1
) war; ( 2 ) diplomacy; ( 3 ) the installation of a permanent military apparatus
( dispositif ).

Twelve: 29 March 1978
The second technological assemblage characteristic of the new art of government
according to raison d'État: police. Traditional meanings of the word up to the
sixteenth century. Its new sense in the seventeenth and eighteenth centuries:
calculation and technique making possible the good sue of the state's forces. -
The triple relationship between the system of European balance and police. -
Diversity of Italian, German, and French situations. - Turquet de Mayerne, La
Monarchie aristodémocratique. - The control of human activity as constitutive
element of the force of the state. - Objects of police: ( 1 ) the number of
citizens; ( 2 ) the necessities of life; ( 3 ) health; ( 4 ) occupations; ( 5 )
the coexistence and circulation of men. - Police as the art of managing life and
the well-being of populations.

Thirteen: 5 April 1978
Police ( continuation ). - Delamare. - The town as site for the development of
police. Police and urban regulation. Urbanization of the territory. Relationship
between police and the mercantilist problematic. - Emergence of the market town.
- Methods of police. Difference between police and justice. An essentially
regulatory type of power. Regulation and discipline. - Return to the problem of
grain. - Criticism of the police state on the basis of the problem of scarcity.
- The theses of the économistes. - The transformations of raison d'État: ( 1 )
the naturalness of society; ( 2 ) new relationships between power and knowledge;
( 3 ) taking charge of the population ( public hygiene, demography, etc. ); ( 4
) new forms of state intervention; ( 5 ) the status of liberty. - Elements of
the new art of government: economic practice, management of the population, law
and respect for liberties, police with a repressive function. - Different forms
of counter-conduct relative to this governmentality. - General conclusion.