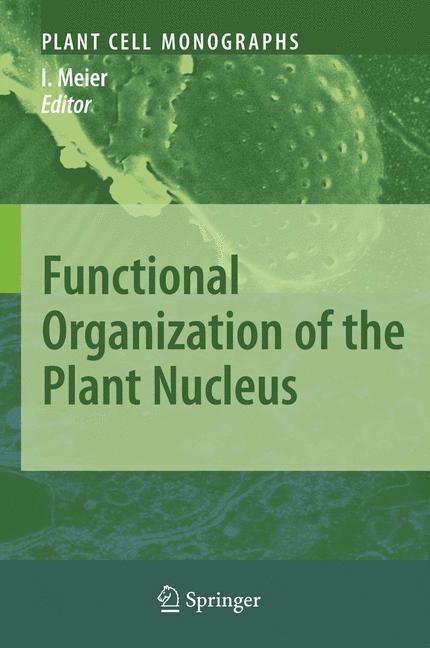 Functional Organization of the Plant Nucleus

In a time of soaring food, and energy needs, the understanding of plants' genetic molecular mechanisms, and their effect on plant growth, is essential. This book presents what is a very timely topic entirely from the plant biologist's perspective.

In a presentation to the Linnean Society of London in November 1831, the Scottish botanist Robert Brown (perhaps better known for his discovery of Brownian motion) mentioned almost as an afterthought that in orchid epidermal cells, a single "circular areola" could be seen, a "nucleus of the cell as perhaps it might be termed." Thus, the term "nucleus" (from Latin nucleus or nuculeus, "little nut" or kernel) was born for the compartment of the eukaryotic cell that contains the maj- ity of genetic information. One hundred and seventy-seven years later, we know that the nucleus is the site where genetic information is stored in the form of DNA, and where it is protected from damage, duplicated, divided, recombined, repaired, and "expressed." For the latter, the genetic information is faithfully transcribed from DNA to RNA, then released from the nucleus into the surrounding cytoplasm. Most likely translated into polypeptide chains, the information re-enters the nucleus in the form of diverse proteins that function in the processes listed above.

"This book, part of the excellent 'Plant Cell Monographs' series, provides a timely, thorough review of nuclear processes. ... chapter contributors deftly draw comparisons to animal systems, making this a valuable resource for all researchers in the life sciences. ... The black-and-white illustrations are ... sufficient to illustrate key points. This work will be valuable for advanced undergraduates and essential for graduate students and above. Summing Up: Highly recommended. Upper-division undergraduates, graduate students, researchers, and faculty." (T. P. Owen Jr., Choice, Vol. 46 (11), 2009)