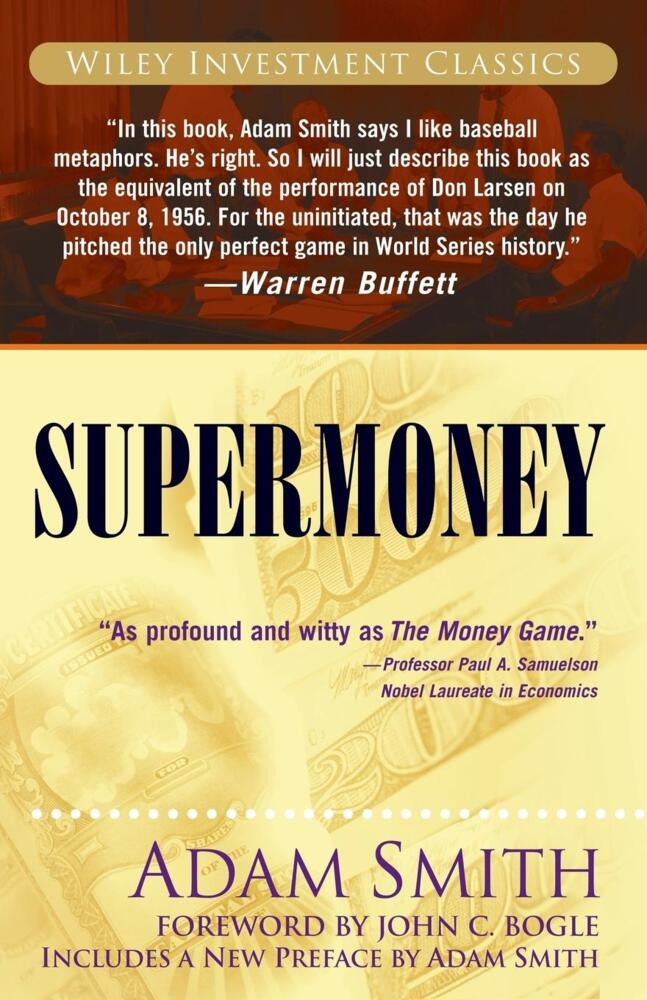 "Everyone who is anyone in U.S. investment knows 'ADAM SMITH,' " wrote Newsweek. While originally he had a fanatic following in the financial community, his reputation has now spread far beyond. Professor Paul Samuelson, America's first Nobel laureate in economics, called his book, The Money Game, "a modern classic."

"Adam Smith continues to dazzle and sparkle! With the passage of time, Supermoney has, if anything, added to its power to inspire, arouse, provoke, motivate, inform, illuminate, entertain, and guide a whole new generation of readers, while marvelously reprising the global money show for earlier fans."
?David M. Darst, author of The Art of Asset Allocation Managing Director and Chief Investment Strategist, Morgan Stanley Individual Investor Group
"Nobody has written about the craft of money management with more insight, humor, and understanding than Adam Smith. Over the years, he has consistently separated wisdom from whimsy, brilliance from bluster, and character from chicanery."
?Byron R. Wien, coauthor of Soros on Soros Chief Investment Strategist, Pequot Capital Management

Supermoney may be even more relevant today than when it was first published nearly twenty-five years ago. Written in the bright and funny style that became Adam Smith s trademark, this book gives a view inside institutions, professionals, and the nature of markets that has rarely been shown before or since. "Adam Smith" was the first to introduce an obscure fund manager in Omaha, Nebraska, named Warren Buffett. In this new edition, Smith provides a fresh perspective in an updated Preface that contextualizes the applicability of the markets of the 1960s and 1970s to today s markets. Things change, but sometimes the more they change, the more they stay the same.

Foreword.
Preface.
I . SUPERMONEY.
1. Metaphysical Doubts,Very Short.
2. Liquidity: Mr. Odd-Lot Robert Is Asked How He Feels.
3. Supermoney,Where It Is:The Supercurrency.
II . THE DAY THE MUSIC ALMOST DIED.
1. The Banks June 1970.
2. The Brokers September 1970.
III . THE PROS.
1. Nostalgia Time: The Great Buying Panic.
2. An Unsuccessful Group Therapy Session for Fifteen Hundred Investment Professionals Starring the Avenging Angel.
3. Cautionary Tales Remember These,O Brother, in Your New Hours of Triumph.
4. How My Swiss Bank Blew $40 Million and Went Broke.
5. Somebody Must Have Done Something Right: The Lessons of the Master.
IV. IS THE SYSTEM BLOWN?
1. The Debased Language of Supercurrency.
2. Co-opting Some of the Supercurrency.
3. Beta, Or Speak to Me Softly in Algebra.
Well,Watchman,What of the Night? Arthur Burns's angst; Thirteen Ways of Looking at a Blackbird; Prince Valiant and the Protestant Ethic;Work and Its Discontents;Will General Motors Believe in Harmony? Will General Electric Believe in Beauty and Truth? Of the Greening and Blueing, and Cotton Mather and Vince Lombardi and the Growth of Magic; and What Is to Be Done on Monday Morning.
SOME NOTES.
I. Table I: Sector Statements of Saving and Investment: Households, Personal Trusts, and Nonprofit Organizations.
II. Table II: Funds Raised, Nonfinancial Sectors.
III. Table III:The Runoff in Commercial Paper; Summer 1970.
IV. Portfolio of the University of Rochester.

The Black Swan
The Impact of the Highly Improbable
Kartoniert

The Alchemy of Finance
The New Paradigm
Gebunden

You Can Be a Stock Market Genius: Uncover the Secret Hiding Places of Stock Market Profits
von Greenblatt, Joel
Kartoniert

Warren Buffett and the Interpretation of Financial Statements: The Search for the Company with a Durable Competitive Advantage
von Buffett, Mary ...
Gebunden