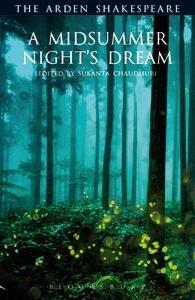 A major new edition of Shakespeare's much studied and performed comedy by leading scholar Sukanta Chaudhuri.

The Arden Shakespeare is the established edition of Shakespeare's work. Justly celebrated for its authoritative scholarship and invaluable commentary, Arden editions guide you to a richer understanding and appreciation of Shakespeare's plays. This edition of A Midsummer Night's Dream provides a clear and authoritative text, detailed notes and commentary on the same page as the text and a full introduction discussing the critical and historical background to the play. The editor brings fresh perspectives on global productions and adaptations of this most-loved of Shakespeare's comedies.

List of Illustrations
General editors' Preface
Preface
INTRODUCTION
STAGE, SCREEN, ART
The play in its time: staging and casting
British productions: Restoration to nineteenth century
British productions: the twentieth century and after
Europe
Beyond Europe
Other media: cinema, music, art
SOURCES AND ANALOGUES: FAIRIES AND MORTALS
Fairies and fairy lore
Ovid: the classics and the fairies
Pyramus and Thisbe
Theseus and Hippolyta: Plutarch, Chaucer and Shakespeare

Chaudhuri, Sukanta
Sukanta Chaudhuri is Professor Emeritus at Jadavpur University, Kolkata. His publications include Infirm Glory: Shakespeare and the renaissance Image of Man (Oxford, 1981), Renaissance Pastoral and Its English Developments (Oxford, 1989) and The Metaphysics of Text (Cambridge, 2010). He has edited the two-volume Pastoral Poetry of the English Renaissance (Manchester, 2016) besides other early modern texts and collections of essays. He was chief co-ordinator of Bichitra, the online variorum of the works of Rabindranath Tagore, and has translated widely from Bengali to English.