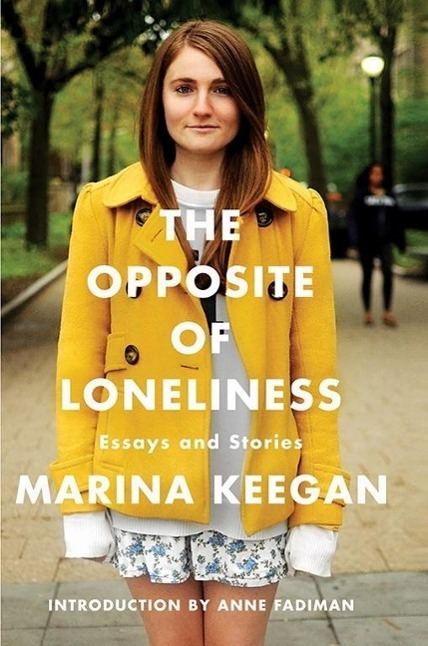 The Opposite of Loneliness

An inspiring, deeply affecting posthumous collection of award-winning essays and stories from a young author who has become an icon for her generation

'A generation-defining collection published posthumously...Her voice is relevant, sharp, fresh, unfiltered and poetic, with a dry wit. You can dive in and out of her questioning and her musings and meanderings. So much promise' Jenna Coleman, star of Doctor Who and Victoria

Marina Keegan's star was on the rise when she graduated from Yale in May 2012. She had a play that was to be produced at the New York International Fringe Festival and a job waiting for her at the New Yorker. Tragically, five days after graduation, Marina died in a car crash.

As her family, friends and classmates, deep in grief, joined to create a memorial service for Marina, her unforgettable last essay for the Yale Daily News, 'The Opposite of Loneliness', went viral, receiving more than 1.4 million hits. She had struck a chord.

Even though she was just 22 when she died, Marina left behind a rich, expansive trove of prose that, like her title essay, captures the hope, uncertainty and possibility of her generation. The Opposite of Loneliness is an assemblage of Marina's essays and stories that articulates the universal struggle we all face as we work out what we aspire to be and how we can harness our talents to make an impact on the world.

'An extraordinary figure, a young person of enormous potential, who had already achieved a great deal...Throughout the 18 pieces in the collection, [that] pathos is delivered with a striking emotional intensity, in sharp and witty prose' New Statesman
'Her voice is so fresh, her enthusiasm so appealing, her ambition so great that you cannot help but wonder what she might have achieved' Jason Cowley, Financial Times
'The writing Marina Keegan left behind offers a tantalising taste of a literary voice still in development yet already imbued with unusual insight, nuance, humour, and sensitivity' Deborah Treisman, fiction editor, The New Yorker

Keegan, Marina
Marina Keegan (1989-2012) was an award-winning author, journalist, playwright, poet, actress and activist. Her non-fiction has been published in the New York Times; her fiction has been published on NewYorker and read on NPR's Selected Shorts; her musical, Independents, was a New York Times Critics' Pick. Marina's final essay for the Yale Daily News, 'The Opposite of Loneliness', became an instant global sensation, viewed by more than 1.4 million people from 98 countries. For more information, visit (...)